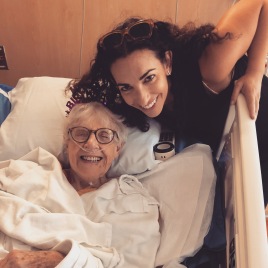 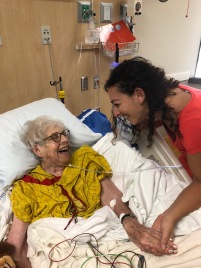 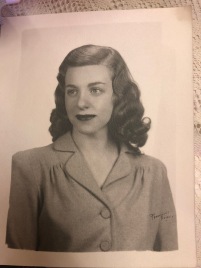 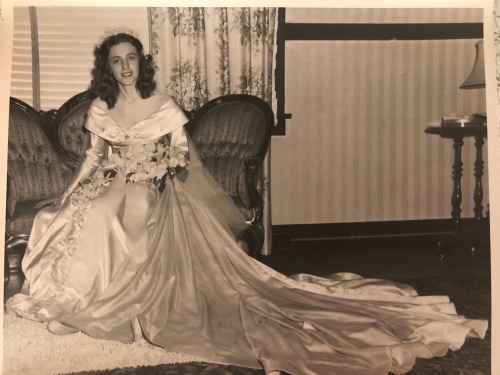 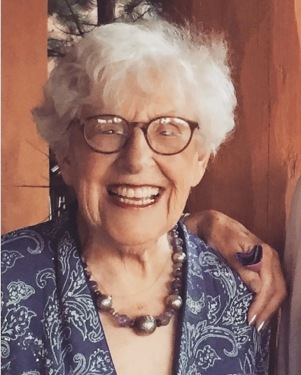 Grandma died. This is a life event you’ve been worried about for months, years, decades even. You were concerned it would be painful, long and arduous, and even scary. But, none of that was true. You didn’t think you’d be able to handle it. You thought you’d die alongside her.

You’re alive and Grandma is now dead. You’ve never liked the words “passed away” because they are vague. It’s mildly comforting to think of Grandma in a special, heaven-like place, even if it’s probably untrue. More likely, she left this earth and nothing happened physically or spiritually. Instead, you have a lifetime of memories to give you comfort, sadness, joy and reflections.

It’s interesting to be here, now. You’ve been living away from your parents and grandparents longer than you lived with and near them. You’ve made a life for yourself in California, after trials and tribulations in jobs, relationships and countless hours of doubt and uncertainty. Grandma was proud of you for your maturity and ability to trust yourself.

How do you cope with death? How did she? Grandma has been thinking of death as long as I can remember. She always talked about not wanting to go “a home” (assisted living where she feared loneliness and isolation). She and Grandpa moved to their independent living apartment seven years ago and she thrived. He perished. Her mental fortitude and determination was a reckoning force; you couldn’t stop her from personal accomplishment. Even well into her nineties, she achieved goals and was awarded for her work. Her memory was a steel trap and she recalled names, dates and details of people with whom she was personally invested.

In the days leading to her final breath, she put on a fierce face to her family. She smiled for pictures, held hands with friends, fought to keep her eyes open. She was alert when we informed her that one of her best friends died. You and your relatives cried when witnessing her body change in the hospital bed, but she kept telling you not to. She denied that you’d miss her. When getting the one-on-one time with her, she offered private and sage advice specifically for you. Among the nuggets she shared was to be “giving, giving, giving, giving, and never unkind.” You’ve tried to live by this Golden Rule, and will make an even stronger point to follow her example as you continue to live.

Classy and practical are two more words to describe Grandma. She wasn’t bothered with frivolous spending but sought great quality and had impeccable style. She didn’t chase trends and knew how to make an outfit. This was in her blood, as she came from a family of merchants and married into one! She ran the store, made decisions and was sharp when it came to business decisions.

As you’ve been thinking about Grandma, you recall the laughter she brought, her marvelous sense of adventure and the aspect about her you’ll miss most: how she was a best friend to everyone she met. When you spent time with her, she made you feel like the only person in the world who mattered. She consistently and quickly took an interest in you, and if that meant you wanted to show her a new skill, inform her of a promotion or a let-down, she was in it with you. She said wonderful things to you, and only complained when she was lonely. She embodied how to love.

Of course you will miss her. And, you will be okay. 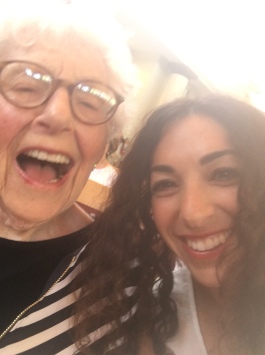 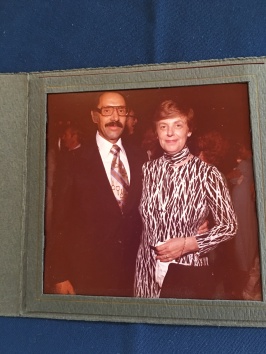 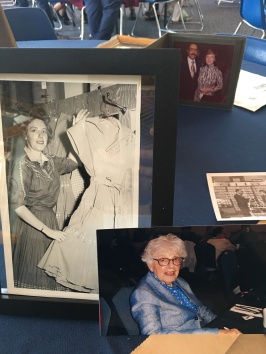 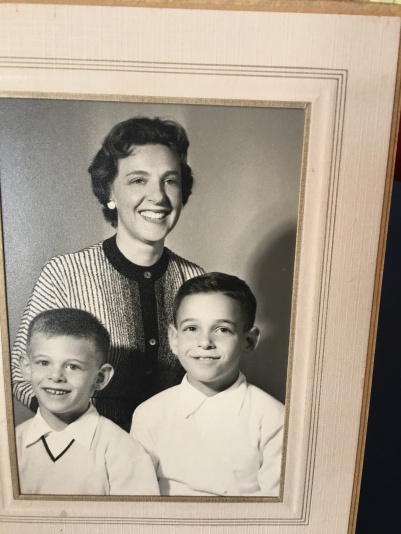 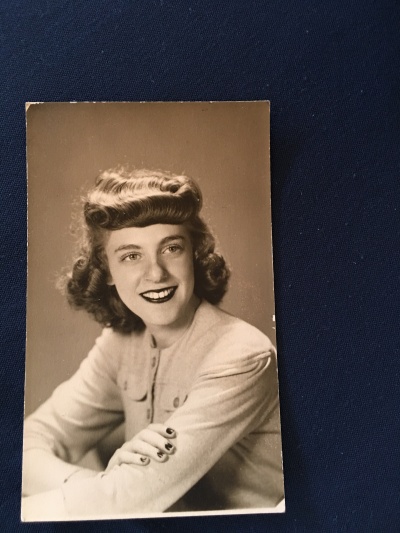 Kathryn Heyman Rubin was born in Albuquerque, New Mexico, to Mina and Louis Heyman on May 12, 1923.  She joined her sister, Bertha (Heyman) Danoff, who was seven years older. Kathryn’s parents emigrated from Germany to the United States early in the twentieth century. Kathryn’s father was a merchant in New Mexico and her mother was a housewife, raising their two daughters. Louis died in 1939 when Kathryn was 15 years old. Her mother died in 1961 at age 67.

Kathryn, Bertha and their mother owned a hat shop, Bertha’s Shoppe, in Albuquerque on Central Avenue for many years. Bertha and Mina were milliners, and Kathryn got her start selling and being the outward face of the store. Known for their customer service and quality craftsmanship, the Heyman women outfitted customers of all walks of life in Albuquerque with fine hats during the Depression era and later.

Kathryn grew up riding horses, doing well in school, and had many friends. She participated in neighborhood antics and loved being mischievous. From a young age, people took a liking to her and she always found a soft spot in the hearts of her elders and peers. She graduated from Albuquerque High School in 1940. She was known in her communities as a kind leader and had an infectious laugh. She met Leon Rubin from Raton, NM. They were introduced by a traveling salesman who knew Leon’s and Kathryn’s families in their respective communities. They married on January 6, 1946. Leon had just returned from WWII and joined his father and brother in running the family business, Rubin’s, a successful clothing store in Raton. Kathryn and Leon were married for close to 67 years before Leon passed away on January 1, 2013, one day short of his 93rd birthday.

They raised their two sons, Randolph and Ronald in Raton. There, the Rubins provided a wonderful life for their family, loving the ease of a small town and being a part of the business and social aspects of the community. They were involved in many organizations both locally and statewide. Kathryn and Leon were well-regarded business owners,running Rubin’s Family Clothiers until its closing in 2011 (the store was open for 95 years!), R&R Shoe Store, Willow Springs Mercantile and Sports Arena with their son, Randy.

Kathryn was awarded the Hurst Award as a Jewish Pioneer of New Mexico on June 4, 2017, and received this honor in Santa Fe, witnessed by many friends and family, being only the 19th individual to receive it. She was also the head of her Jewish synagogue in Trinidad, ColoradoTemple Aaron for close to 30 years, maintaining and improving the structure with the help of History Colorado and Colorado Preservations, Inc. She was a Paul Harris Fellow in Colorado Springs at the Downtown Rotary Club where her Ron serves as president. Kathryn was named to the Trinidad State Junior College Foundation’s Hall of Fame in 2013 and was on the Educational Foundation Board for over 20 years.

In Raton she was a member of Pick and Shovel, Eastern Star, Raton Friends of Music, Community Concert Association and PEO, as well as a Cub Scout Den Mother while Randy and Ron were growing up. For over fifty years, she was a member of the Seventh Street Coffee Club, a Friday lunch group, and a bridge club. She was a life member of Hadassah. As well as donating her time, she was philanthropic and generous to numerous causes and families.

Kathryn spent her final seven years at MacKenzie Place in Colorado Springs with Leon until his death. Kathryn was considered the “mayor” of MacKenzie Place because of her interest and involvement in the people who lived there and her help with ideas to improve senior living.

Kathryn had many friends and family all over the country, but especially in Colorado and New Mexico. She was a natural “connector” and made sure to introduce new friends to each other regularly. She made a video recording of her life a few years ago entitled “A Life Well Lived” that will serve as her legacy for years to come. She was always grateful for her family, long life, and her many blessing that followed her throughout her life. Family and friends meant everything to Kathryn.

Her mind was sharp until the very end of her life. Kathryn will be remembered for her generosity, love of people and their personal lives, and helping her friends and extended family with anything she could do to make their lives better and happier. She had an uncanny sense for remembering people, facts, figures and dates. She had a wonderful sense of humor and a remarkable memory of almost everything in her life and the lives of others. She died saying she lived a happy, full life and didn’t have regrets.

I’m a Life Coach. To process your own losses and to build relationships, please contact me.  You may also like these other blog posts: Whose Life Are You Living?, Dinner With Schwartzie, In Memory of My Kitty, Olive

5 thoughts on “A Most Special Person, My Grandma”

Back to top
Girl Rebuilt

My personal diaries on failing at love miserably & the lessons on love addiction that rebuilt me. Please click Follow.

I cheated. Yip I did it, I am not proud of it, but that won't change a thing. This is my story of me trying to survive one day at a time. No guarantees....

One Mile at a Time

Belly Over Mind
A year of reading the world

The Journal for Food Studies

What I Learned in California

Lessons Learned From 17 Years in the Land of Milk, Honey & Broken Dreams

A 30-something therapist analyses her dates

candour- the quality of being open and honest in expression; frankness.

Speaking My Truth Through A Consuming Passion To Write